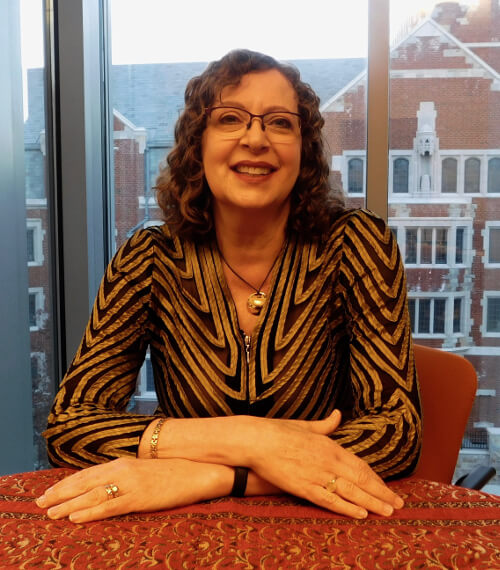 Marcia C. Inhorn, PhD, MPH, is the William K. Lanman, Jr. Professor of Anthropology and International Affairs in the Department of Anthropology and The Whitney and Betty MacMillan Center for International and Area Studies at Yale University. She is the founding editor of the Journal of Middle East Women’s Studies (JMEWS) and has served as director of the Council on Middle East Studies at Yale (2008-2011) and the Center for Middle Eastern and North African Studies at the University of Michigan (2004-2006). A specialist on Middle Eastern gender and health issues, Inhorn has conducted research on the social impact of infertility and assisted reproductive technologies in Egypt, Lebanon, the United Arab Emirates, and Arab America over the past 30 years.

Dr. Inhorn is the author of six books on the subject, including America’s Arab Refugees: Vulnerability and Health on the Margins (Stanford U Press, 2018), Cosmopolitan Conceptions: IVF Sojourns in Global Dubai (Duke U Press, 2015), The New Arab Man: Emergent Masculinities, Technologies, and Islam in the Middle East (Princeton U Press, 2012), Local Babies, Global Science: Gender, Religion, and In Vitro Fertilization in Egypt (Routledge, 2003), Infertility and Patriarchy: The Cultural Politics of Gender and Family Life in Egypt (U Pennsylvania Press, 1996), and Quest for Conception: Gender, Infertility, and Egyptian Medical Traditions (U Pennsylvania Press, 1994).

These books have won the AAA’s Robert B. Textor and Family Prize for Excellence in Anticipatory Anthropology, the JMEWS Book Award, the Society for Medical Anthropology’s Eileen Basker Prize, and the AAA’s Diana Forsythe Prize for outstanding feminist anthropological research in the areas of gender, health, science, technology, and biomedicine. She is also the editor or co-editor of ten books, including Reconceiving Muslim Men: Love and Marriage, Family and Care in Precarious Times (Berghahn Books, 2018), Globalized Fatherhood (Berghahn Books, 2014), Medical Anthropology at the Intersections: Histories, Activisms, and Futures (Duke U Press, 2012), Islam and Assisted Reproductive Technologies: Sunni and Shia Perspectives (Berghahn Books, 2012), Anthropology and Public Health: Bridging Differences in Culture and Society (Oxford U Press, 2009), Reconceiving the Second Sex: Men, Masculinity, and Reproduction (Berghahn Books, 2009), and Infertility around the Globe: New Thinking on Childlessness, Gender, and Reproductive Technologies (U California Press, 2002). She is also co-editor of the Berghahn Book series on “Fertility, Reproduction, and Sexuality,” section editor of Reproductive BioMedicine and Society, and associate editor of Global Public Health.

In 207-2018, Inhorn served as Head of Studies in Anthropology at Yale-NUS College, Singapore. She has also been a visiting faculty member at the American University of Beirut, Lebanon, and the American University of Sharjah, United Arab Emirates, where she has conducted studies on “Middle Eastern Masculinities in the Age of New Reproductive Technologies” and “Globalization and Reproductive Tourism in the Arab World.” In Fall 2010, she was the first Diane Middlebrook and Carl Djerassi Visiting Professor at the Centre for Gender Studies at the University of Cambridge. Before coming to Yale in 2008, Inhorn was a professor of medical anthropology at the University of Michigan and president of the Society for Medical Anthropology of the American Anthropological Association.

She is married to Kirk R. Hooks, and they have two children, Carl, 23, and Justine, 20. Together, they have lived in Egypt, Lebanon, and the UAE.

Master of Arts (MA) in Anthropology/Medical Anthropology, University of California, Berkeley, CA; Degree Conferred in May 1985

Bachelor of Arts (BA), Double Major in Anthropology and Journalism, University of Wisconsin, Madison, WI; Degree Conferred in May 1980, with Honors.

Note: The calligraphic artwork is by Khaled Al-Saai.